Over-cooked potatoes and burnt toast could cause cancer

Roasting and frying starchy foods could increase the risk of cancer, a Government body has said.

The Food Standards Agency (FSA) has issued a public warning over the risks of acrylamide - a chemical compound that forms in some foods when they are cooked at high temperatures (above 120C).

A new campaign tells people how they can cut their risk, including opting for a gold colour - rather than darker brown - when frying, roasting, baking, grilling or toasting.

Acrylamide is found in high levels in a range of foods including breakfast cereals (not porridge), chips, potato products (such as waffles or children's potato shapes), biscuits, crackers, crispbread and crisps.

Root vegetables including potatoes, sweet potatoes, beetroot, turnip, swede and parsnips can all carry high levels of the compound once they have been roasted or fried until darker brown or crispy. As well as high temperatures, long cooking times can increase levels of acrylamide even further.

Foods such as skinny fries and crisps appear to have the highest levels.

Acrylamide forms due to a chemical reaction between certain sugars and an amino acid (asparagine) in the food.

However, boiling, steaming and microwaving appear far less likely to cause the reaction.

Studies in mice have shown that high levels of acrylamide can cause neurological damage and cancer.

While studies in humans have proved inconclusive, experts believe the compound has the ability to cause cancer in humans.

The US Environmental Protection Agency has said acrylamide is “likely to be carcinogenic to humans” and the International Agency for Research on Cancer (IARC), part of the World Health Organisation, says it is a “probable human carcinogen”.

In its new campaign, the FSA said people could take simple steps to reduce their consumption of acrylamide.

As a “rule of thumb”, people should aim for a golden yellow colour or lighter when frying, roasting, baking or toasting starchy foods. 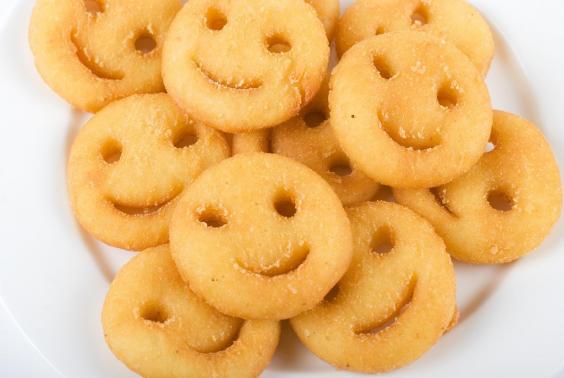 For example, roast potatoes should not be “fluffed up” to maximise dark brown crispy bits and they should be roasted to the lightest colour that is acceptable. Toast should also be browned to a light brown colour.

People are being told to follow the cooking instructions on packaging to ensure foods are not cooked for too long or at too-high temperatures.

They should also stick to a varied, balanced diet to reduce their overall risk of cancer.

The FSA said people should not keep potatoes in the fridge, which can increase overall levels of acrylamide. Instead, raw potatoes should be stored in a dark, cool place with temperatures above 6C.

Evidence also shows the longer potatoes are kept, the more acrylamide can form.

Steve Wearne, director of policy at the FSA, said manufacturers had already taken steps to cut the levels of acrylamide in foods, but it was time for consumers to be made more aware of the risks. He said studies showed babies, children and adults in the UK consumed too much acrylamide from food.

He added: “We are not saying people should worry about the occasional meal... this is about managing risk over a lifetime.

“People might, for example, think 'I like my roast potatoes crispy', but they will just decide to have them less often.”

Other examples of ways to cut acrylamide include having chunky chips on occasion rather than fries.

Cutting potatoes into larger wedges reduces their surface area, thereby cutting down the level of acrylamide that can form. Crinkle-cut chips are worse than normal chips as they have a larger surface area.

Gavin Shears, a senior policy adviser in contaminants at the FSA, said: “We are not expecting people to go out and radically change their diets if they're eating a healthy balanced diet.