From BBC Radio 4's You and Yours 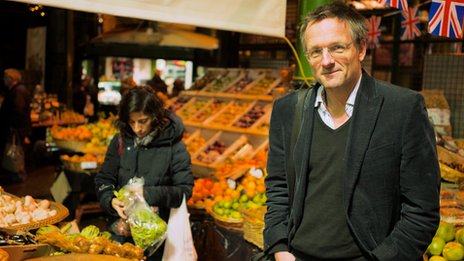 One of the best known pieces of dietary advice is to eat five portions of fruit and vegetables a day, but where did it originate? Michael Mosley investigates:

'Five-a-day' is perhaps the best known of all the government's health messages and, as such, it can be seen as one of the most successful.

I'd heard that it was a health message that had originated on the other side of the Atlantic, so I thought I'd start by going all the way back to its origins.

It seems the 'five-a-day' message was first dreamt up on the fields of California in 1988.

Ken Kizer was director of the State Department for Health Services. He says that it wasn't a case, as some have claimed, of fruit and vegetable growers looking for new markets, but a mutually beneficial venture for industry and public health policy.

"It didn't originate from the agricultural community. It just so happens that when we reached out to them and pointed out this would help them, they got onboard and became enthusiastic partners."

He says the evidence behind the campaign was compelling: "Beginning in the mid and late 1970s, the evidence became quite clear about the role of diet in preventing cancer and heart disease and other conditions."

Prof Tim Lang was advising the government when it was mentioned in the UK in the late 1980s.

He says: "I was called to a meeting at the Department of Health to discuss whether or not Britain should go down the route of using five-a-day.

"I was a bit sceptical, but I knew the evidence and the policy thinking that unless we got the population as a whole eating more fruit and vegetables, the enormous burden of diet-related health would carry on.

Despite being officially adopted by the UK government in 2003, people are still eating an average of only three and a half portions of fruit and vegetables a day.

Almost all fruit and vegetables count as part of your 'five-a-day' and they don't always have to be fresh. An exception that surprised me is potatoes.

Tom Sanders, professor of nutrition at King's College London says that is a little unfair.

"I think there was a bit of middle-class morality that people like chips and crisps and they didn't want to encourage that.

"Actually potatoes really are vegetables and are okay if they're baked or new potatoes, rather than fried."

The five-a-day message has always been tied to health benefits, specifically that eating more fruit and vegetables reduces your risk of heart disease and cancer.

Studies over decades of people's diet and health have thrown new light on the associated health benefits.

Dr Eric Brunner is an epidemiologist at University College London.

He says: "What's turned out in the last dozen years or so is that, although some of these hypotheses have been confirmed, many of them have fallen over.

"The big one was fruit and vegetables in relation to the intestine.

"It turns out that dietary fibre is a protective factor so we're still on the side on unrefined cereals, but the fruit vegetables measured by vitamin C intake turns out to be completely unrelated to breast cancer and to colorectal cancer."

He says the five-a-day message still has value though.

"I would certainly not want people to throw the baby out with the bathwater because it is clear that eating unprocessed fresh foods is going to be a good idea, if only because it replaces the not so good nutrients".

Prof Sanders agrees that fruit and vegetables are not "super foods" that protect against cancer but - like many nutritionists - takes the view that it is better to fill up your plate with vegetables than a lot of the other high-calorie food it's so easy to snack on.

The Food and Drink Federation says all fruit and vegetables count, even if they are in a smoothie or a tin.

But Prof Sanders say that misses the point.

"It's chomping your way through the fruit and veg that has an effect on satiety. Once you mash it up into goo so you can consume much more it doesn't really have the same effect."

So, has five-a-day worked?

The government's former chief medical officer, Sir Liam Donaldson, says he thinks it has been partially successful so far.

"The middle classes did listen, and the supermarkets listened and they tend to respond to the middle class consumer particularly.

"I think it's been less successful in reaching the disadvantaged communities where those levels of fruit and vegetables were already low.

"It's a long-term project. It's the right project."

A spokesman for the Department of Health said: "Getting your five-a-day can help lower the risk of serious health problems, such as heart disease and some cancers, but we know that can be a challenge.

"That is why we want to work with the food industry to help everyone make healthier choices."

I think that, of all the government guideline campaigns I've looked at, this has been the most successful, in the sense that people have at least heard of it even if they don't know what it means.

The downside of such a simple message is that lots of foods most nutritionists wouldn't regard as healthy somehow sneak in under the guise of '5 a day'.

My campaign slogan would be eat more plants!

Accurate but, I suspect, not very sexy.